skip to main | skip to sidebar

So there we were. Winds force four out of the North East. 8 foot seas pounding the rail, spray covering the deck. Below, the smell of top ramen and coffee at 3 in the morning tells me  it must be the first day of finals week. Stepping on to the quarter deck for dawn watch, we are given our first test. “Set the fish!” Looking back 4 weeks ago when we walked onto this ship I would have stared down at my toes then into the faces of my watch wondering if anyone happened to speak sailorese or knew what was going on in the least. But now, after four weeks of being at sea, we are running this ship. Harnesses clinking under the starry night we stumble, bumping into rails and walls on a 20 degree heel, to engage in B watch’s favorite task: sweating the throat. Our cheerful TA Robbie is the first to get in there, fortunately someone had freshened the nips quite well before us. I grab on the line as John calls out the sail handling orders, and immediately half of B watch is sweating up the throat with Laura and Caroline buried under a mass of muscling bodies lifting our sail to a glorious climax above the wine dark sea.

Back at Stanford some 3,000 miles away, our friends are cramming for an Ochem final, knowing that studying is futile when the Professor asks them to solve what earned someone the 1965 Noble Prize in Chemistry. Yet, they have much more relaxing next few days. If you think your Math 51 class was hard, try writing a scientific paper on a gimbled table on a starboard tack close reach into force 5 winds and 8 foot seas; the only thing keeping your laptop from hitting you in the chin or flying onto the soles is a fierce grip, furious typing, and your faith in the limited friction of teak. Our personal Meyer library is quite small but still has some of the same old charms. Faint light of computers reflected onto glaring faces in deep concentration, deep sea mining excel spreadsheets to find the secrets of marine snow, purple back flying squid, and whether parrot fish are really the pansiest fish in the sea. Markers and straight edges replace power point, as I try to recall my drawing skills which peaked in about 3rd grade. The noises of the waves on the starboard hull drowned out by the endless clicking of 45,000 coral point counts like some strange educational video game from hell. A rogue waves catches our scientist Tommy and the lobby with a salty surprise reminding all of us  that we are indeed still on the ocean. Normal is all relative. Our jib sail beginning to rip might have sounded frightening back in Palo Alto but its just another chance to jump out onto the head rig and get lifted from 6 inches above the swell to 20 feet in air like a dream see-saw. The rest of the library just looks up at the messenger before returning to the drone of data processing.

It  may sound like our own little hell, endless processing dissolved oxygen and net tow data,  but unlike on main campus, we are having a lot fun and all in preparation for our presentation marathon the next day because this is our own science. We all cram into the main salon, every space is either covered in left over fruit bars or sweaty Stanford at Sea students. Despite the PCO2 rising and creating our own OMZ, we are stunned by the 8 well crafted presentations. Sitting around 35 of my new family members, trying to avoid breathing through my nose and risk smelling the lack of showers and laundry, wishing someone had bleached their keens. Sitting on the sole listening about squid bursting with gonads, the sewage input onto coral reefs, praying I didn’t swim by any floaters on Fanning island, and about marine snow from robot lasers I realized how far we have come from learning oceanography in Monterey. After three hours of presentations, a serious lack of oxygen, and sunlight, we head up to the quarter deck, the sun setting over the deep blue sea we have called home for the past 4 weeks. Our orange ventilation tubas pointed toward the wind, as we have conversations of phrenmid amphipods and mantas, as in the background a guitar strums In the wind. The Life Aquatic.  “Happy llama, sad llama, totally rad llama. Super llama drama big fat mama llama. Baby llama, craaazy llama, Barak Obama llama, yes we can.” Okay maybe we are losing it just a bit out at sea, but hey its finals week and where else would I rather than be than sailing 9 knots under the fisherman heading straight for Walters special place; an eddy on a sea mount south of Hawaii, he glory of sailing for science. 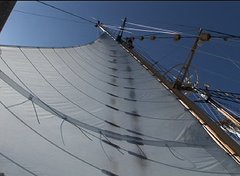 SEA Education Association (SEA) offers college students a study abroad that challenges them intellectually and physically by combining a sailing adventure of a lifetime with the study of the deep ocean.